Every object that takes shape goes through a process, for us the most beautiful of all is that of fusion 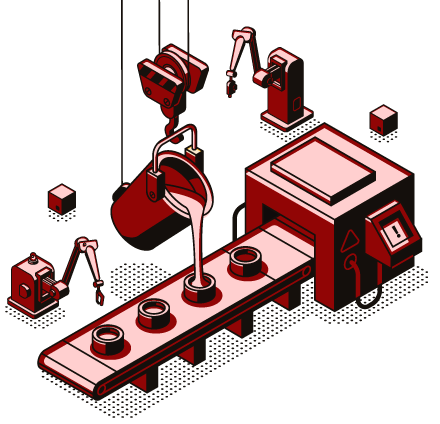 In modern industry, cooperation between customer and supplier often arises before the product is manufactured, so we offer our expertise in various solutions to support the customer from the first design. Co-design solutions include the most common design technologies, such as CAD drawing, reverse engineering, casting simulations and FEM simulations. Preliminary economic analyses of the project are very important to us, allowing the client to have a complete overview of the costs and risks of the project.
The development of metal prototypes is becoming more and more efficient, we offer turnkey solutions for Rapid Casting technology or lost wax casting, with more or less hybrid solutions, in order to evaluate the economic and return on investment in the short and long term.

The study of the moulds and production equipment is a fundamental aspect for the management of the investment, they must therefore be managed with a careful technical and economic evaluation to allow the shortest possible return on investment without compromising the quality and costs of the subsequent phases. We supply equipment according to the customer's real needs, using a wide range of technologies, from disposable polystyrene models to die-casting moulds.
Sand casting
Sand casting involves gravity casting of molten metal into a sand mould, which is then broken to extract the component and reused in the next mould an unlimited number of times. The advantages include the possibility of economical production from a single prototype up to a medium series, the possibility of making even very complex shapes with many cores, the large dimensions achievable and a good quality of the finished casting. This technology has limitations in terms of the minimum thickness of the walls, about 3-5 mm, a low dimensional tolerance and a medium-high roughness surface compared to other casting technologies. Furthermore, it is not suitable for the large-scale production of serial components due to the low speed of the production process.
Shell casting
Shell casting consists of pouring molten metal into permanent steel moulds. This process is used for metals with a low melting point such as aluminium and bronze. Advantages include the possibility of producing more components at lower costs, improved mechanical properties due to rapid cooling of the metal and the possibility of obtaining thinner thicknesses with better surface roughness. However, tooling costs are higher than for sand production and the technology is not suitable for large or heavy components, and it is difficult to apply it to complex, core-rich components.
Low pressure casting
Low pressure casting consists of pushing molten metal from the bottom of a permanent mould by means of gas pressure. This technology is used for medium to high production of components, it allows a very good quality of the melt in terms of defects and mechanical characteristics and is moderately automatable, allowing a good production rate. The surface finish is better than that of shell production, which also reduces casting anals and vents, making deburring easier. The investments for this technology are on average high, in addition to the steel mould a dedicated machine is required to handle the metal, this limits the flexibility in terms of the size of the components that can be made and moves the use of this technology only to high repetitive components.
Die-casting
Pressure casting takes place by pushing the molten metal into a steel mould with high pressure using a piston. This is also used for low melting temperature alloys such as aluminium and zamak, and is the technology with the highest productivity rate, as it has a very short cycle time and allows large series of products to be produced at low cost. It also allows the production of the thinnest thicknesses, 1.5-2 mm, with very low surface roughness. However, this process requires moulds and machinery with high costs, which can only be amortised thanks to large series production. Moreover, due to the great turbulence of the metal, the castings are characterised by microporosity that does not allow particularly high mechanical characteristics to be achieved. Unlike with shell casting and low pressure, die-cast components cannot have disposable cores, which makes it difficult to reproduce moulds with particularly complex undercuts.
Lost-wax casting
This technology consists of making a wax model in the shape of the parts to be made, including the casting cavities. It is then immersed in a mixture of refractory powders that polymerise to become extremely solid, and is then fired, allowing the wax to evaporate to make room for the metal to be cast. In this case, a variety of alloys can be cast, including steel, aluminium, gold and silver. The advantage of this solution is the great flexibility of use as it does not require expensive models and has an excellent finish and the ability to produce very complex shapes. Due to the long production times, it is not suitable for large production runs.

The mechanical machining of castings brings with it complexities that are different from those encountered in machining from blocks or carpentry. Attention to clamping and step-by-step control are essential to avoid defects and rejects. This analysis is often underestimated in the development of the component, making the workshop's work more complex. For this reason, we have a few highly trusted partners, highly specialised in the machining of cast components, who are able to carry out milling, turning, boring and generally all the most common machining operations.
Especially in the furniture and design sectors, the issue of finishes is essential.

The possibilities are many and each has its own application, even in the finishing processes, whether polishing, painting, anodising or coating of metal materials, castings behave differently depending on the metal chosen and the production technology and certainly cannot follow the same production processes as components profiled or cut from sheet metal.

This is why Castize is working on a guideline to clarify the possibilities and visual response between finish, production process and metal.

The management of controls is an aspect of supply that has become fundamental over the years. Quality cannot be delegated to the supplier's skill, it must always be guaranteed.
The possibility of carrying out destructive and non-destructive tests allows us to anticipate and avoid possible non-conformities. We therefore help the customer to identify the right control process, which can guarantee quality with the lowest possible impact on the cost of the component, and we then supply the controlled components, complete with all the necessary certificates.
We give our customers the opportunity to purchase from us the management of pre-assemblies, including the storage of semi-finished products and the production of assembly sheets. Outsourced assembly activities are increasingly in demand for the manufacture of complex machines, in order to meet the flexibility required by the markets and to reduce the fixed costs of setting up assembly areas. Through partner carriers and couriers, we also manage the delivery directly to the customer throughout Europe. 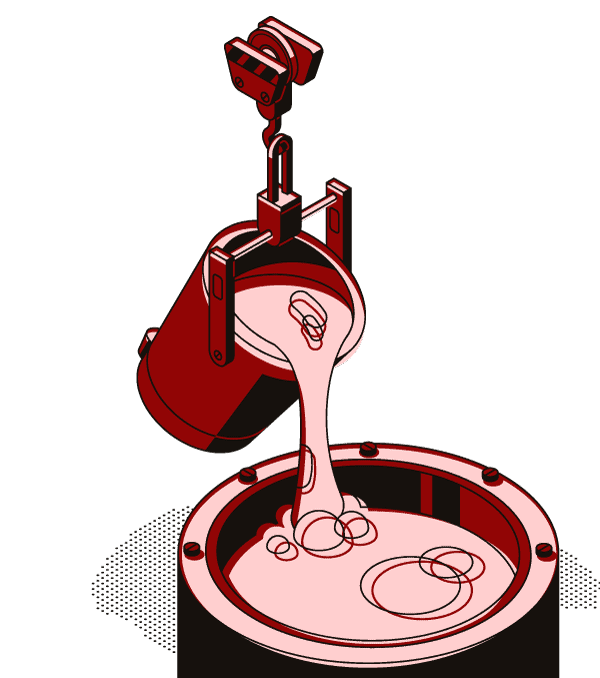 ABOUT USCASTIZE AROUND THE WORLD